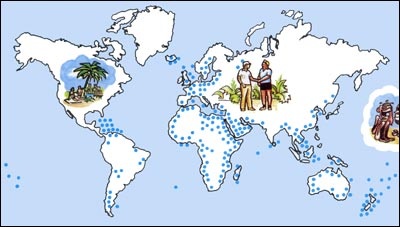 In Eritrea, on the Red Sea, a number of our lattice portals were used to build a large agricultural school in 1934.

While in Ethiopia, on the single-track railway line from Addis-Ababa to Djibouti, the steel framework and cladding for every one of the 22 railway stations was supplied by us in 1936.

This line, in 1984, carried 1,000 tonnes of our steel buildings for 20 large grain stores to help with famine relief at Nazareth in Ethiopia.

We were back in Djibouti again 47 years later to erect a generating station, bottling plant and associated buildings in the Gulf of Tadjourah. Our engineer lived in a mud dwelling with a French crocodile hunter, an Ethiopian and an Eritrean, no air conditioning but several scorpions and snakes – There was almost no water but they managed with beer.

Almost every trip overseas has its interesting times, like being jailed for opening our own bolt crates, having fried cucumber for breakfast, lunch and dinner every day and shaving with Coca Cola, as well as being held up by bandits – and by the Police!

In Sri-Lanka we supplied and supervised the erection of 6 rice stores for the Paddy Marketing Board, starting on sites at Maragahawewa (in the Wipatu National Park) and Huruluwewa near Anuradhapura, that fascinating ancient capital city and religious centre. The work was interrupted on the site at Adampan for a short period because of a thoughtless chap who waded across at low tide from India and brought cholera with him.

Further up the Indian sub-continent we shipped a new paint factory to Bangalore. ForBangladesh we recently supplied 18,000m2 of warehousing for the Port of Chittagong in spite of the efforts of sundry typhoons to disrupt the work. 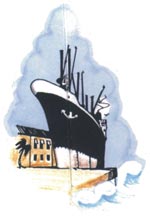 Our warehouses, factories and assembly halls have been erected as far away as Rarotonga, that tiny paradise isle in the South Pacific 1,633 miles N.E. of New Zealand and 12,434 miles from London Docks.

While 1,400 miles to the West a warehouse and market building is to be found in Fiji and a further 900 miles west in New Caledonia there are trading stations and warehouses supplied by us so long ago we can’t remember when.

During 1988 we designed and made the steelwork for the two 180ft spans of the 360ft Ngalimbu bridge in the Solomon Islands, financed by British Aid from the Overseas Development Administration and ordered by the Crown Agents.

They also ordered a large workshop and crane for Santo in the Vanuatugroup of islands (New Hebrides). Our first two buildings for Santo were for the French Oil Research station in 1965. They were erected within 14 weeks of leaving our works.

In 1987/88 we shipped 2 big workshops complete with overhead cranes, for the P.W.D. New Zealand has 395 of our buildings, including a small country-town church and in Australia our structures can be found near Perth, Adelaide, Brisbane, Sydney and Melbourne.

In the Falklands Islands in the South Atlantic our steelwork is to be found at San Carlos and four at Port Stanley. On Adelaide Islandnear the South Pole (Antarctica), you will find a Sewage Treatment Building.

Even those tiny mid-Atlantic Islands of Tristan de Cunha, St Helena and Ascension have sent us small orders to enrich our daily diet. At Las Palmas in the Canary Islands the cinema and nearby market buildings were made by us.

At the Brazilian port of Bahia there is a soap factory, at Santiago in Chile, just a few thousand miles off, a transport depot, recently joined by a large Naval aircraft hangar and the new Presidential Flight Hangar, and at Rio Verde a warehouse.

At Georgetown, Guyana several large warehouses and sugar stores. Just over the border in Suriname we recently supplied a large workshop for the mining industry. In Central America, on the Pacific seaboard of Costa Rica near Punta Arenas, there are factories, while in Belize further north we supplied the Civic Centre and Auditorium in Belize City and many other industrial and agricultural buildings as well as the bridge over the Rio Bravo and another for the Southern Highway.

In spite of the efforts of several Caribbean hurricanes, one of which blew away most of the bananas in Jamaica in 1951 and deposited a large cargo freighter on the wharf in Kingston, our structures are still there and many have been shipped since.

For New Providence Island in the Bahamas we spent many happy hours in 1986 designing, making and finally supervising the erection of a huge 86,000 sq ft brewery for Heineken so that they could refresh the parts that other lagers don’t reach.

They must have been pleased because they asked us to provide another in the Cameroons to help refresh the inhabitants of those parts too.