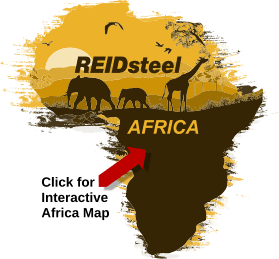 In Eritrea, on the Red Sea, a number of our lattice portals were used to build a large agricultural school in 1934, while in Ethiopia, on the single-track railway line from Addis-Ababa to Djibouti, the steel framework and cladding for every one of the 22 railway stations was supplied by us in 1936. This line, in 1984, carried 1,000 tonnes of our steel buildings for 20 large grain stores to help with famine relief at Nazareth in Ethiopia.

We were back in Djibouti again 47 years later to erect a generating station, bottling plant and associated buildings in the Gulf of Tadjourah.

In West Africa our buildings are almost everywhere, from Mauri, Senegal, Liberia, the Ivory Coast, Benin, Dahomey, Cameroon and Equatorial Guinea right down to the Congos and Angola. For Zambia we made a hovercraft hangar.

A multi-storey hotel building at Banjul in The Gambia is helping the tourist trade whilst further up the river Kanifing are a variety of stores and warehouse buildings. We also supplied all the steelwork for the new fish and meat market.

A lot of our work is to be found in Ghana, including the recent terminal building at Kotoka Airport. Eastwards, Uganda, Tanzania, Madagascar, Mauritus and the Seychelles in the Indian Ocean account for at least 100 of our buildings between them. At the port of Beira in Mozambique there is a new warehouse of 10,000m2 designed and made by us – We supervised the erection work too.

In Lesotho, that land locked Republic (surrounded by South Africa) a ring road has been built right around the country for which we designed, made and supervised the erection of the multi-span hot dip galvanised double lane steel bridge at the Maputseng River Crossing.

We’ve been designing and erecting bespoke steel buildings for over 90 years, since the 1920s, when it all started with a hangar for Louis Bleriot
Read More

Co-ordinating multiple contractors can be a thing of the past – Reidsteel offer multi discipline projects with one point of contact for the entire job.
Read More

REIDsteel are fully compliant in the CE Marking of fabricated structural steelwork – Now a legal requirement in UK and Europe.
Read More

Our export team has arranged shipping and erection of projects across 130 countries, in some of the most remote parts of the world.
Read More
[/hide]