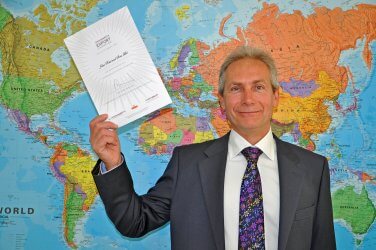 The council, which is the business arm of the Commonwealth, recognised us for our excellence, ambition and innovation.

It means we will be held up us a role model to encourage businesses to think internationally and act as an ambassador to bang the drum for UK exporters.

We’ll also receive high-level support to break into new markets amongst the 52 English-speaking countries in the Commonwealth, which has a combined population of 2.2 billion people and GDP of £7.4trillion ($9.6 trillion).

We’ve already exported to more than 140 countries over nearly 100 years and look forward to developing our international trade through this new accreditation.

Our Sales Manager Mike Chappell represented the company when received a certificate at a Commonwealth export conference at Westminster in London.

Mike said: “The Commonwealth is a fast growing market place with one third of the world’s population.

“We know from experience just how vital international trade is and already have strong and successful trading links worldwide.

“It is an honour to become the first steel construction company to be named as an Export Champion.

“It will allow us to build on our export success whilst encouraging other businesses to expand their horizons worldwide and help realise the vast potential of the Commonwealth network.”

CommonwealthFirst was established by the Commonwealth Enterprise and Investment Council.

Council chairman Lord Marland said: “This programme is a wonderful way of demonstrating both the ingenuity of British businesses and the huge opportunities in Commonwealth markets.”

We have the capability to design, manufacture, ship and erect entire steel buildings including their cladding and or glazing requirements anywhere in the world – from factory buildings in Mauritius and bridges in Africa to aircraft hangars and industrial buildings in the UK.

We’re a four times winner of the Queen’s Award’s for Enterprise (International Trade).

We’re accredited by the BCSA for the Qualified Steelwork Contractors Scheme for Bridgeworks (RQSC), by the Contractors Health and Safety Assessment Scheme (CHAS) and the UK Accreditation Service (UKAS) for its management systems. We’re also a CE Marking approved company.

The Commonwealth’s roots go back to the British Empire although today it is a voluntary association of independent and equal sovereign states.

According to CommonwealthFirst, shared language, complementary legal systems and business practice, helps to reduce trade costs by around 19% between member countries.

It expects Commonwealth trade to double to US$1 trillion by 2020.

Contact our Sales Manager Mike Chappell for more details on 01202 483333 and MikeChappell@reidsteel.co.uk for more about export exp