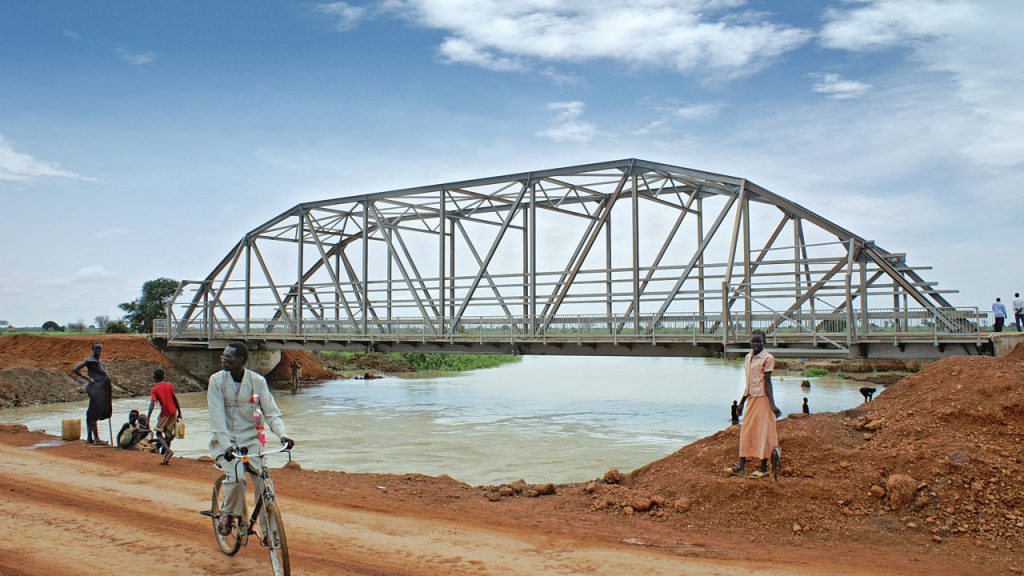 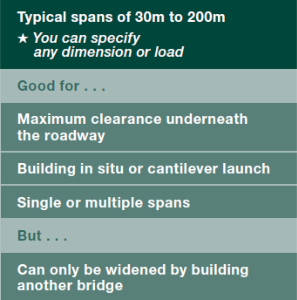 This is done using ‘shear connectors’ fixed to the steel beams and then embedded in the concrete.

Shear connectors can be welded on, perhaps using a ‘stud welder’, or better still on export work, by fixing nuts and bolts.

Carriageways are two lanes with a total width of 7.2m between the steel crash barriers which run along both sides. These barriers prevent trucks or their payload from hitting and damaging the bridge trusses and offer protection for people and their animals crossing the bridge.

The decks are local reinforced concrete – 0.25m thick, placed on our lost formwork decking with no propping needed. They can have 0.05m of surfacing. The bridge decks are carried by two trusses at, and above, deck level and stabilised with a bracing system.

The bridge decks are cambered from side to side using pre-cambered steel transoms and slightly cambered from end to end using the built in camber of the trusses.

There are two walkways, both outside the main trusses, 1.2m wide, with handrails outside. The pedestrian, handcart and cycle traffic using them is protected from the vehicle traffic by the crash rails and main trusses. The walkway decks are local reinforced concrete 0.125m thick placed on our lost formwork decking.

The bridges can be erected in-situ on a temporary causeway or on temporary jackable props; or may be built on the ‘home bank’ and cantilever launched across the gap. For the cantilever launch, a ‘Launch Kit’ is needed, consisting of sets of rollers, a steel ‘launching nose’ fitted to the leading edge of the bridge (and removed for re-use after launch), and come-along cable jacks.

The bridges will sit on our elastomeric bearings on your abutments. Expansion joints for the roadway are provided at both ends.

The bridges may be combined with other bridges to make multi-span crossings. The bridges can be built in-situ; or they can either be gantry launched from one end or cantilever launched.

For multi-span bridges which are to be cantilever launched it is necessary to use a ‘Link Kit’ which consists of further sets of rollers, and further jacks, and a set of link steelwork which joins adjacent bridges during the launch and roll-out. As with the Launch Kits, the Link Kits can be used again and again.