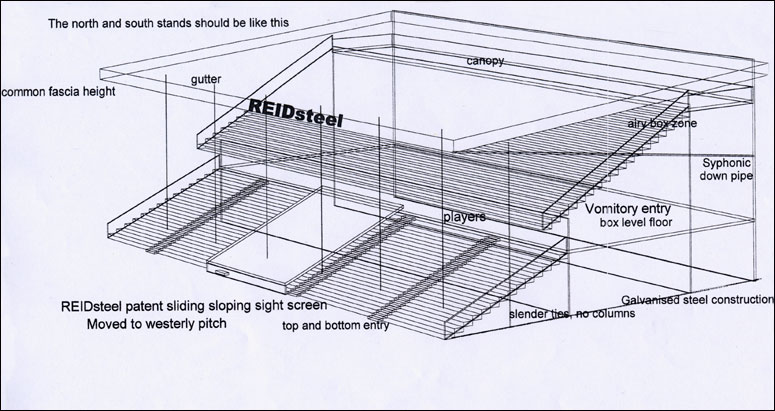 It is just as important to have no columns, or the thinnest possible columns, in front of cricket grandstands as for any other sport.
Many cricket stands have forests of columns, some of them very obtrusive.REIDsteel can help eliminate these obstructions.

Because of the oval shape of the ground, any columns in the two ends of the stands will obstruct views of certain parts of the field.
REIDsteel can eliminate columns in the ends of grandstands.

Cricket grandstands are a long way from the wicket so it is customary to have the grandstands as close as possible to the boundary.
This means that, technically, not all seats provide a clear view of the boundary over the heads of the people in front.
REIDsteel can help optimize the compromises of being close to the action yet still being able to see as much as of the field and boundary as possible.

Because of shortage of space, in addition to the need to be close, many cricket grandstands have a second tier or more.
These make viewing the boundary more difficult and make it more likely that stands have large numbers of obscuring columns.
REIDsteel can again help to optimize the arrangements to give closer, clearer, less obstructed vision.

Because the boundary is curved, some cricket grandstands are designed curved. This is aesthetically pleasing yet very expensive to make, seal and manage.
Most cricket clubs and associations will not want to waste money.
REIDsteel can help design the most economic stands, which will usually consist of short, straight stands, sharing a common drop fascia line, but with gaps for air and light and calypso bands. If total number of seats is the top priority, then of course the wedge shaped gaps can be filled in; although more expensive than the straight runs of seats, the infills are cheaper than curves. The priority ought to be for the biggest number of the best seats in the most effective way.
If capacity is too small once all the cheap seats are in place, then the more expensive wedge shaped infills come into play (see sketch 1,2).

Cricket stands have traditionally had simple roofs, sloping down towards the field, for very good reason. The maximum sunshine gets to the field, the maximum protection from sun and rain is afforded to the spectators. Most importantly, low fronted covered stands do not produce hit and miss, dark and light, shadows on the pitch in the opening or closing overs; grandstands with exposed steel trusses and/or cantilevers or ballooning canopies above the fascia produce intermittent shadows on the pitch. For a batsman to see and react to a cricket ball at 90 mph is quite astounding. To have him do so when the ball is lit up then turned off as it hurtles towards him is impossible and dangerous. Unfortunately the designs of many new stands are being driven by visions of the grandest constructions piercing the sky, without regard to their effect on the sport in question.

Perhaps all designers of such protuberant architecture should face Brett Lee one evening, as a result of which they might decide to put their grandiose schemes away.

REIDsteel can help design the lowest, smoothest, most practical and cost effective canopies. Our drop fascias are ideal for carrying sponsor’s advertisment, too.

REIDsteel can also help to make a safe boundary fence which can carry hoarding and have access gates for crowd safety at every gangway.

A feature of cricket grounds is the provision of boxes, verandahs and pavilions. If designed into the grandstands these can be made safe and comfortable, have good viewing and be cost effective as well. REIDsteelcan help with the design of corporate and club facilities in the grandstands, including of course, useful floor space underneath the terraces (see sketch 3).

The best place from which to view cricket is, without doubt, in line with the pitch; either behind the bowler or behind the batsman. The flight of even the fastest ball can be tracked by eye, the amount of turn seen, snicks from the edges can be observed, LBWs can be guessed at. All the excitement of cricket is there. In tropical areas, the Caribbean, India, Pakistan, Sri Lanka for example, this location is even more important. The pitches should be oriented North-South, so that the Tropical sun passes overhead without ever being in the batsman’s or bowler’s eyes. The people in the North and South stands, likewise, are shaded by their canopies and never have the sun in their eyes. Viewers in the West stands have sun in their eyes till lunch. Spectators in the East stand have more and more sun in their eyes until, when the last exciting overs are bowled, they can hardly see. Canopies on the West stand start to blot out the light on the pitch. So if every spectator could be in the North or South stands, cricket in tropical countries could be a much better spectator sport…if only these end stands were not ruined by the sight screens. Indeed in many wonderful tropical grounds there is no end stand at all in at least one of the sightscreen end.

But in every ground until now, these best viewing places have been ruined by old fashioned vertical sight screens. Only a few V.I.P.s are given box positions above the sight screen. The viewers behind and on either side have very restricted and obstructed views. This was before the invention of the REIDsteel patent sliding sightscreen. This is built onto the grandstand at the height of the top of the flip-up seats in the lower tier, and, from the batsman’s view point gives an uninterrupted blank screen of the same width and height as a conventional sliding sight screen. But all the people in the grandstand can see past it, from above and from the sides. Only those seats directly under the screen are lost but those above and either side are unobstructed. This REIDsteel patent sloping sliding sightscreen is best used on new purpose built grandstands, but may in some locations be retro-fitted to existing stands. Many features, of doors, one way vision panels, slope changes, steps and so on can be embodied in the design.