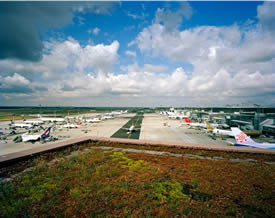 Modern urban roofscapes are lifeless places. They experience violent temperature contrasts, bitter winds, and are an antipathy to water.

However, a revelation in roof design is securing itself a firm seat in the Sustainability club. ‘Green Roofs’ – gardens planted not into rooftop flower pots or containers, but into a special mix of soil on the roofs – are becoming more and more common. And not just for their beauty. Green Roofs lessen the environmental extremes common on conventional roofs, reduce storm-water runoff, increase energy efficiency, and enhance the urban soundscape.

Waterproof membranes now make it easier to design green-roof systems that capture water for irrigation, allow drainage, support the growing medium, and resist the invasion of roots. In some places, such as Portland, Oregon, builders are encouraged to use ‘living roofs’ by fee reductions and other incentives. In others—such as Germany, Switzerland, and Austria—living roofs are required by law on roofs of suitable pitch. 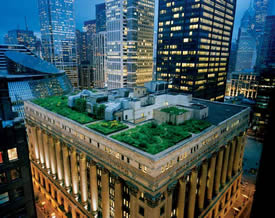 During the summer, daytime temperatures on conventional asphalt rooftops can be almost unbelievably high, peaking above 150°F and contributing to the overall urban heat-island effect—the tendency of cities to be warmer than the surrounding region. On green roofs the soil mixture and vegetation act as insulation, and temperatures fluctuate only mildly—hardly more than they would in a park or garden—reducing heating and cooling costs in the buildings below them by as much as 20 percent.

When rain falls on a conventional roof, it sheets off the city’s artificial cliffs and floods down its artificial canyons into storm drains—unabsorbed, unfiltered, and nearly undeterred. A living roof works the way a meadow does, absorbing water, filtering it, slowing it down, even storing some of it for later use. That ultimately helps reduce the threat of sewer overflows, extends the life of a city’s drain system, and returns cleaner water to the surrounding watershed. London, for example, is already planning for a future that may well see more street flooding, and the city is considering how living roofs could moderate the threat.

The combination of soil, plants and trapped layers of air within green roof systems can act as a sound insulation barrier. Sound waves are absorbed, reflected or deflected. The growing medium tends to block lower sound frequencies whilst the plants block higher frequencies. Green roofs can reduce sound by 8dB compared with a conventional roof system. This could be particularly important in areas of high noise pollution such in the approaches to airports, as these levels are sufficient to provide noise insulation to buildings under aircraft flight paths.

And naturally there are the environmental benefits. Plants absorb carbon dioxide and release oxygen, and play an important role in minimising Global Warming. These roofs are havens for wildlife. Species large and small—ants, spiders, beetles, lapwings, plovers, crows—have taken up occupancy on living roofs. And it’s not just a matter of making new or replacing existing habitat. In Zürich, Switzerland, the 95-year-old living roof of a water-filtration system serves as a refuge for nine species of native orchids eradicated from the surrounding countryside when their meadow habitat was converted to cropland.

While the average cost of installing a green roof can run two or three times more than a conventional roof, it’s likely to be cheaper in the long run, thanks largely to energy savings. Vegetation also shields the roof from ultraviolet radiation, extending its life. Maintenance extends to some light gardening every now and again.

Stephan Brenneisen, a Swiss scientist and a strong advocate for the biodiversity potential of living roofs, says simply, “I have to find easy, cheap solutions using materials that come from the region.” That means less reliance on plastics and other energy-intensive materials between the roof structure and the plants themselves. What matters isn’t only whether living roofs work. It’s how to make them work in the most sustainable way, using the least energy while creating the greatest benefit for the human and nonhuman habitat.

Green Roofs are adding habitat to cities, filtering rain, moderating temperatures. And in a World where humans have robbed it of its resources, hunted its wildlife, and poisoned its atmosphere, people will feel much happier in a building that has given something back to Nature.

Read ‘The Whole Story’ which looks at the whole lifecycle of sustainable built environments.