A flagship hospitality centre with steelwork designed, manufactured and supplied by REIDsteel has officially opened at the iconic Thruxton Motorsports Circuit.

Its innovative design also includes a grand atrium and entrance lobby to reflect the dynamism of motorsport and Thruxton’s rich heritage.

We designed, manufactured and supplied all of the steelwork, cladding and glazing for the modern, two-storey building alongside local contractor Mata Construction.

It is one of many cutting-edge arenas and stadiums we have designed and manufactured both at home and abroad, including football grounds and sports centres.

The project architect was the Chapman Partnership, which specialises in the motorsport and automotive, leisure and entertainment industries.

Construction started on the 1,415 m2 complex in August 2017.  It can host up to 400 guests over two floors, with extra capacity available outside. 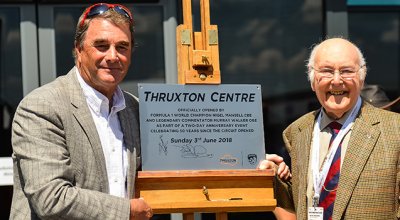 Nigel said: “It’s been a great privilege to be here at Thruxton with Murray.

“He’s ever the voice of motor sport and a great friend. It’s been a fantastic day for the fans, with superb weather and just a wonderful atmosphere.

“It’s one of the last circuits that has kept its identity, which is great. The British Automobile Racing Club has done a fabulous job to evolve, and I think the new Thruxton Centre is absolutely brilliant.

“What people don’t realise is just how much work has gone into it – it’s a great credit to the whole team, so congratulations to them all.”

Murray added: “This fabulous new hospitality building is what Thruxton has really needed, and now it’s here, I’m sure the venue is going to go from strength to strength.

“Sponsors will want to come here, people will want to hold events here and it will all add to the lustre of Thruxton because there’s nothing people like more than to be made a fuss of.

“To be brought to a building like this and shown such terrific racing like the British Touring Car Championship or British Superbikes is something, I think, that will guarantee a bright future for the circuit.”

Vehicles on show included evocative single-seaters, sportscars and GTs out on the track to the eye-catching Williams F1 line-up in the paddock, including an ex-Keke Rosberg FW08C from 1983, Nigel Mansell’s famous ‘Red 5’ title-winner and the last of the sport’s six-wheelers, the groundbreaking FW08B.

Special guests included Robs Lamplough, who contested the 1968 European Formula Two Championship race at Thruxton, and Duncan White, whose association with the circuit stretches back to the very first meeting 50 years ago.