Home/News/Green light for safer future with steel
Previous Next 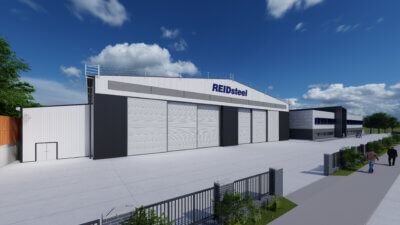 Steel Times International recently published an article about REIDsteel leading the way in the structural steel sector in a special edition about decarbonisation. Many thanks to the magazine for focusing on our initiatives. Here is the full article…

THE structural steel sector could prove to be an important cog in the wheel of change as momentum builds towards a cleaner, greener decarbonised industry.

Deadlines are coming ever closer – including the government’s 2050 net zero target for all sectors of the economy and the 2035 aspiration for near-zero emissions from ore-based steelmaking recommended by the national Climate Change Committee.

Structural steel firms such as John Reid & Sons (Strucsteel) Ltd are in a percipient position, able to gauge sentiment amongst clients and main contractors on one hand as well as suppliers on the other; especially when it comes to cost and sustainability.

The Dorset-based company – known as REIDsteel – has recognised the growing influence of sustainability on its own and clients’ decisions for some time, although such eco-sensibilities may well be tempered as energy and steel prices rise.

Managing director Simon Boyd, a member of the CBI’s manufacturing council, said: “Our customers care about the quality and provenance of our steel and so do we.

“We have named British Steel as our preferred supplier and are absolutely convinced of its quality and credentials.

“Its BES 6001 environmental and sustainability certification for the responsible sourcing of products certainly played a part in our decision.

“More broadly, it is paramount that there is a strong, vibrant and sustainable steel industry for UK plc but also for our national security, infrastructure and the health of our manufacturing and construction bases.

“We are living in a more uncertain world, in some part due to climate change, and appreciate that the war in Ukraine and rising costs may have a damaging impact upon on the country’s ability to progress the sustainability agenda.

“As a company we remain committed to net zero and will continue to deliver the most efficient and highest quality solutions for our customers.”

Simon added: “We can use our position to influence sustainability decisions upstream in the steel making process but are also able to make a difference through our own design, engineering, fabrication, manufacturing and erection processes.”

REIDsteel – which celebrated its centenary in 2019 – directly employs 130 people at its main base in Christchurch, Dorset, and at peak times provides work for 400 people through subcontracting.  It has won the Queen’s Award for Enterprise (International Trade) four times and has exported to more than 140 countries to date.

It is a modern company with strong financial foundations which remains family owned and is led by a dynamic and progressive management team. There is a ‘one team’ ethos which values every employee and encourages wellbeing. The company believes in giving back to the community and has a strong focus on continuous improvement in all aspects of the business.

It can work on inhouse designed schemes – from conception to completion – or value-engineered projects, whether it is steel only that is required or the whole building envelope.

Customer preference, budget and specification clearly play a role in any given project and its sustainability as well as REIDsteel’s own ability to deliver carbon savings.

Value engineering is key. For pre-designed schemes this can create the same or greater structural strength and integrity while using less steel.

Equally, for new projects REIDsteel delivers optimum solutions with the least amount of steel yet the highest quality design and durability.

Ultimately, this saves money, time and materials but also energy and reduces the overall carbon footprint of a scheme including production, fabrication, road miles and erection.

A recent project where value engineering demonstrated its worth was a new terminal at Kumasi International Airport in Ghana where a reduction in the amount of steel used in the structure was achieved, which meant a saving on the cost of the entire building envelope.

It also has rooftop space for 2,000 solar panels and shore power connectivity allowing ships to ‘plug in’ rather than keep their engines running.

REIDsteel used a wide variety of British Steel products to reduce base reactions by a factor of 10. This helped save millions of pounds. REIDsteel conceived, designed, detailed and fabricated the steel frame of the structure.

Another project was a new hangar at Norwich Airport with main contractor MJS Projects where value engineering was able to rationalise the scheme’s structural steel design which led to savings in both time and money.

The maintenance, repair and overhaul (MRO) hangar is 16m high to the eaves, measures 91m-wide by 55m-deep and has two equal spans of 45.5m – crucially with a central spine to create a column free space on the hangar floor.

Efficient, innovative, sustainable and economical designs will increasingly contribute to the overall sustainability of projects and their energy efficiency.

The Kumasi International Airport terminal included a roofing system to comply with a specific noise and thermal reduction specifications along with high-specification glazing, including ‘statement’ curtain-walling for the elevations of the building with solar controls to withstand extreme sunlight and temperatures.

The 12,500 sq m terminal is at the heart of the €125 million (£104 million) airport development. The scheme, which is being built by Contracta Construction UK Limited, is due to complete later this year for Ghana Airport Company Ltd.

Other innovative designs have been used for a flagship hospitality centre at Thruxton Motor Circuit and a new headquarters for the Ministry of Foreign Affairs in Belize, which included an advanced through-wall façade system and glazing to give a modern and stylish look while keeping the building cool.

REIDsteel’s expertise also contributes to the longevity and resilience of structures – meaning less time, money, energy and resources have to be spent on repair or reconstruction.

One of its specialisms is disaster resistant structures designed and built to withstand such natural catastrophes as hurricanes and tsunamis.

All of its buildings survived the devastating hurricanes of 2017 in parts of the British Virgin Islands.

Recent disaster-resilient structures with the REIDsteel hallmark included a new national Civic Center in Belize, Lady of Fair Haven Cathedral in Roseau on Dominica in the Caribbean and a new Enis Adams Primary School on Tortola.

Steel will also have a role to play in supporting the drive for greener industry in the UK, whether it is for new structures or infrastructure.

For example, a new bridge for Templeborough biomass power plant in Rotherham. This was built to allow delivery of many major parts – including 130-ton turbines – for the new facility plus traffic when operational.

REIDsteel was appointed by Interserve Construction Ltd for the design, supply and installation of the new structure in 2016.

The power station was designed with the capability to produce 41MW of green electricity – enough for up to 78,000 homes.

Of course, steel’s durability, superior strength to weight ratio and flexibility – and recyclable qualities – means it is the ultimate construction material and can play a key role in improving the energy efficiency of buildings.

According to British Steel, steel transported within the UK produces 50% less CO2 than steel sections sourced from the EU.

Meanwhile, supply routes can offer total emissions of less than 10kg CO2 per tonne of steel in some cases – four times less than steel sourced from mainland Europe.

As a company, REIDsteel is committed to net zero.  It was the first contractor to sign the UK Steel Charter with UK Steel in support of British manufacturing and is a member of the British Constructional Steelwork Association (BCSA) and the Confederation of British Industry (CBI).

The company has signed the UN’s Race to Zero pledge and is working towards the gold standard of the BCSA’s Sustainability Charter.

This drive for net zero has been built into multi-million-pound redevelopment plans for its site in Christchurch, Dorset – including a new manufacturing facility and offices.

The manufacturing facility will feature rooftop solar PV panels which will be able to generate enough electricity at peak times to power the entire factory.

Other key features include switching to electric-powered forklifts, investment in energy-efficient technology and machinery, high-specification buildings allowing an end to gas and oil as a source for heat, reduction of HGV traffic and an enhanced travel plan.

REIDsteel will also be able to fabricate more steelwork itself rather than subcontract at peak times, reducing road miles and saving energy.

Simon said: “Our redevelopment plans are a vote of confidence in the steel industry and its sustainability goals.

“For our company, business growth and clean energy go hand in hand with steel as the ultimate construction material of choice.

“We aim to be among the UK’s first structural steel contractors to reach net zero.

“It is a goal which will not only yield real and practical benefits for our company but also for our customers, the economy and the steel sector as it drives toward a low carbon future.”