Basketball players hit the court in the first competitive match to be played as part of a grand opening at the Belize Civic Center.

The Smart Belize Hurricanes and the Belize City Defenders played in front of a packed crowd at the $33.9m (Belize Dollars) flagship complex in Belize City.

Douglas Walker, of Belize-based Professional Engineering Services, captured some of the action from one of the grandstands at the center and kindly sent the pictures to us. The Hurricanes triumphed 80-60 over the Defenders in an exciting game to open the arena in style.

REIDsteel performed the structural design, detailing and fabrication, including the cladding and glazing, for the landmark project.

The center’s air-conditioned arena has a seating capacity of 4,500 for sports and entertainment.

Other events lined up in May are an evening of professional boxing and a Teachers’ Day celebration and conference. 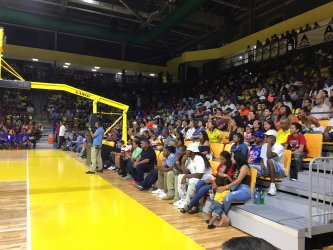 The first competitive match came on a Monday night before a Bank Holiday to add to the celebratory atmosphere.

It came a couple of weeks after a friendly tournament between high school teams in Belize City as part of the opening celebrations.

Like REIDsteel’s other buildings in Central America and the Caribbean, the Center is purpose-built to withstand hurricanes and other natural disasters.

REIDsteel has the capability to design, manufacture, ship and erect entire steel buildings including their cladding and or glazing requirements anywhere in the UK, Europe and the world.

It can design, make and build all elements of stadia from the frame to gangways, entrances, exits, tunnels, terracing, seating, sliding roofs, corporate hospitality boxes and balconies.