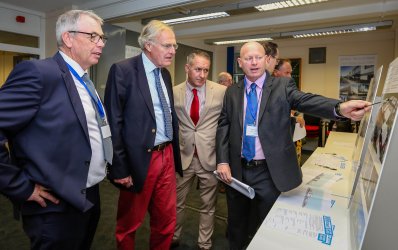 More than 200 people attended our public exhibition in Christchurch about our exciting new development plans.

We held the consultation event in the community room at Christchurch fire station to unveil our proposals to residents, businesses and local groups.

Our plan is to move to a new state-of-the-art facility after outgrowing our existing home of more than 50 years in Reid Street, Christchurch.

We’re proposing that up to 220 new homes be built on the site in Reid Street after we leave for the new headquarters elsewhere within the borough.

Visitors to the public exhibition had the chance to find out more, give their views and fill out feedback forms.

REIDsteel managing director Simon Boyd said: “It was a very busy event with lots of feedback from those who attended.

“The plans were well received by the majority of people and the initial results from our feedback forms have also been positive.

“Our thanks go to everyone who took the time to attend and for their constructive comments, which will be considered for our outline planning application.

“We look forward to submitting the application for housing shortly, which people will also be able to comment upon.”

We aim to relocate to an as yet unnamed site in Christchurch – we hope to announce details very soon.

This will allow our business to invest in the latest technology and significantly increase productivity with operations all under one roof.

It would also remove heavy industry away from the town centre and provide much needed housing and regeneration of a key site with economic, social and environmental benefits.

Initial findings from the feedback forms showed that more than 60 per cent of respondents were in favour or strongly in favour of the removal of industrial use from the site and thought housing was the best use once we had relocated.

Seventy-six per cent of respondents believed the plans would help REIDsteel improve productivity and support the local economy, while 73 per cent wanted to see the company remain within the Christchurch area when it moves.

Some 73 per cent of people rated the overall approach to the design and layout of the housing as very good, good or fair.