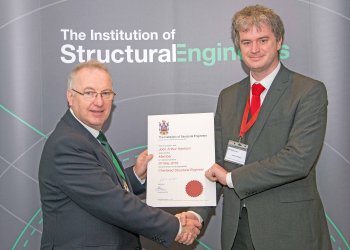 John marks his tenth year with REIDsteel in 2020. He has a degree in Civil Engineering – MEng (Hons) – from Cardiff University and has worked as the lead designer on nearly £20m worth of projects over the past decade.

His achievements have included successfully acquiring the patent for REIDsteel’s leading edge protection system and the design of a biomass power plant access bridge in Rotherham.

John, who is a former student at Corfe Hill School in Poole, said: “It was a great honour to receive my Chartership certificate from the IStructE president Joe Kindregan.

“It is a tremendous feeling to be a Chartered Structural Engineer and I would encourage others to follow the same path too.”

The IStructE is the world’s largest membership organisation dedicated to structural engineering.