Something a Little Different

Something a Little Different

REIDsteel have designed and supplied many steel churches and cathedrals in Africa and the Caribbean. In Tanzania, a REIDsteel church was blessed by our local reverend from Christchurch Priory and in Antigua we constructed the church which their Labour Party Leader was recently wed in.

Having built many steel structures in Mauritius, which you can read about here, REIDsteel were only too pleased to supply the Societe du Saintesprite et Ducoeur de Marie (Society of the Holy Spirit and The Sacred Heart Of Mary) a new feature of their shrine dedicated to Père Laval.

Just a short distance from Port Louis, at Sainte Croix stands the church and subsequent shrine and museum of the Mauritanian saint, Père Laval.  He arrived as a missionary in 1841 and is credited with converting 67,000 people to Christianity during his 23 years in Mauritius. After his death in 1864, his grave at the Sainte Croix church became a place of pilgrimage due to his life work helping the poor and the sick. 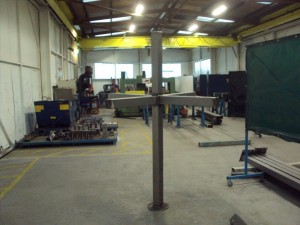 Père Laval was beatified in 1979 and people from around the world still make the pilgrimage to Sainte Croix every year on the anniversary of his death, the 7th and 8th September. He remains an important and popular figure to Mauritians of all religions.

In 1968, a modern church was built to replace the one that Père Laval would have preached from. Along with this renewal was the modernisation of Père Laval’s final resting place. A stone sarcophagus within a spacious vault contains the remains of Père Laval. REIDsteel’s specially designed and fabricated steel lantern and cross will be placed above this. We are proud to be part of this national monument that will visited by millions of pilgrims in the many years to come.