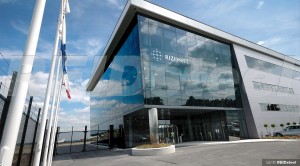 In 2011 we completed the structural work on the magnificent 13,000sq m hangar and terminal at Biggin Hill Airport on behalf of Rizon Jets. It’s a beautiful building of which we’re all really proud.

The hangar is designed to house Rizon’s private and business hire fleet so we were all surprised and delighted to discover that it was the venue for a very special music event last week.

Following a day of broadcasting from Biggin Hill to mark the 70th anniversary of the Dambusters Raid, BBC Radio 2’s Dermot O’Leary and Jeremy Vine presented a very special Friday Night is Music Night programme live from the hangar. 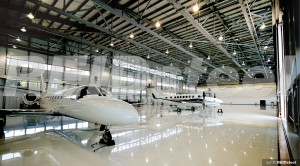 The amazing story of the raid, which saw 19 Lancaster Bombers, each carrying the ‘Bouncing Bomb’ take off from Lincolnshire to destroy the Ruhr Valley dams was re-told with music from the BBC Concert Orchestra and the Central Band of the RAF.

As well as the music, the story was dramatised and had special messages from veterans and Barnes Wallis’ daughter.

Although acoustics wasn’t part of the spec when we built the hangar, it proved to be a fantastic and atmospheric auditorium. All-in-all the evening was a fitting tribute to the 133 British, Australian,

New Zealand and Canadian airmen who took part in the raid and the 53 who lost their lives during the daring event.