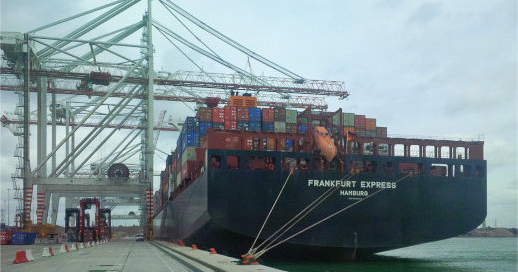 Employees of REIDsteel recently visited Southampton docks for a tour of the container terminal hosted by DP World, who run the container port operations with its partner Associated British Ports (ABP) – They saw the continuing development of facilities at Southampton, including the new recently completed No 5 Berth, which can take the very largest container vessels in service anywhere in the world.

Between 70% and 80% of REIDsteel structures are exported through ports in the UK, such as Southampton.

The visitors from REIDsteel are all involved in the export of REIDsteel structures: despatch and shipping manager Ana Monti and despatch administrator Catherine Carey, who make the arrangements for export shipments and prepare export documentation; Ali Titcombe and Tim Cook from the commercial team; yard foreman Ian Hibbard, crane drivers Steve Marshall and Steve Frampton, who lead the loading of materials into the shipping containers at our factory in Christchurch; Luke Armes who travels to supervise off site loading activities.

The group received a briefing on the activities of the port by DP World Southampton’s Commercial Manager Robert Freeman and met the operations manager, who explained the ship planning process; also how the arrival and departure of container ships is managed along with other port movements, such as the large numbers of cruise ships that now use the port of Southampton and the oil vessels berthing at Fawley refinery.

The group were then taken on a tour of the container port and shown the whole process from arrival of containers at the port by either road or rail: how the vehicle booking system (VBS) works; the auto-check-in; the security checks that take place; customs checks; how the trucks are directed to the correct area to off load; how the containers are handled by enormous straddle carriers and place in stacks, then picked and loaded by enormous cranes onto the ship.

The group were driven in a minibus down all five berths to see the ship loading/off loading activities close up. And the whole process is running in reverse too for handling incoming containers with goods being imported to the UK.

The enormity of the operation at Southampton has to be seen to be believed – On the day we visited there were over 34,000 TEUs (Twenty foot Equivalent Units) in the ‘stack’ at the port.

“How do they find the correct container and put it on the correct ship you might ask?” These days it is all done by GPS – The location of each container in the stack is recorded automatically by GPS as it is placed by the straddle carrier.

The company welcome the continued development at DP World Southampton in the hope that in the future more of the routes we need for export of our goods will be available from a local port, significantly reducing the number of road miles our goods have to travel when compared to shipment from other UK ports, such as Felixstowe, Tilbury and northern ports.